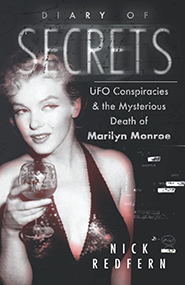 UFO Conspiracies and the Mysterious Death of Marilyn Monroe

“On the day of Marilyn’s death, Robert Kennedy checked out” “Assassination can seldom be employed with a clear conscience” “Discredit any statements she may have made before she died” “She had secrets to tell” Cold-hearted murders made to look like suicides and accidents. Classified government documents fallen into the wrong hands. Explosive diaries. Powerful people with dangerous agendas. Government people prowling around. Hollywood conspiracies. Frightened people with disturbing secrets to hide. Wild sex. Drugs. Crazy parties and flowing booze. At the very heart of it all, an amazing story of UFOs, aliens, Roswell, Area 51, and the life and death of a beautiful, but scarred, icon: none other than one of the most famous and loved actors of the 20th century: Marilyn Monroe. Biographie de l'auteur : Nick Redfern is the author of more than 60 books on UFOs, the Loch Ness Monster, Bigfoot, zombies, and Hollywood scandal. His books include The Rendlesham Forest UFO Conspiracy; The Roswell UFO Conspiracy; Women in Black; Men in Black; Nessie; Chupacabra Road Trip; The Black Diary; and 365 Days of UFOs. He is a regular on the Travel Channel’s show, In Search of Monsters. Nick has also appeared on the BBC’s Out of This World; the SyFy Channel’s Proof Positive; and the National Geographic Channel’s Paranatural.